A Brief History of the Cuckoo Clock 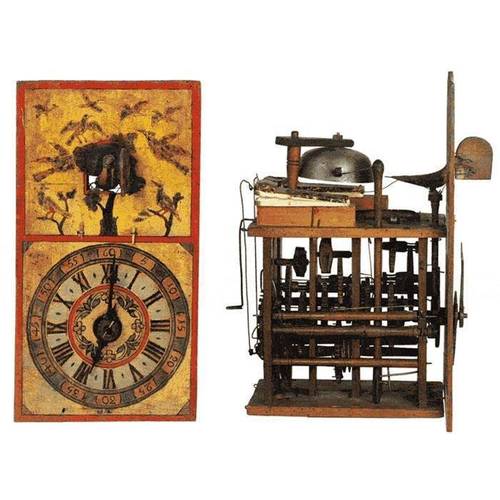 Quick Guide Through the Interesting Background of the Intricate Timepieces Cuckoo Clocks has a history almost as colorful as the clocks themselves.  The tradition of the clocks goes back hundreds of years and is steeped in German charm, innovation, and craftsmanship.

Cuckoo Clocks originated, and are still produced, in the Black Forest Region of Germany. The mythical forest that spawned countless fairytales also gave rise to the famed clocks. The earliest known coo coo clock dates to 1619 but there is evidence to suggest the tradition may be older. The iconic cuckoo call started appearing in clocks around this time and probably appeared in other mechanical products as well. But by the 1670’s that call was firmly associated with cuckoo clocks.
During the early rise of the clocks there were three famed makers:

It is widely believed these makers are responsible for the cuckoo’s clocks success during the early 1700’s.  But the clocks that lined the walls of these maker’s shops were not the ones we picture today.  They were varied and no signature “style” had yet emerged. The cuckoo clock we picture today rose to fame in the 1800’s thanks to the success of the Bahnhäusle clock.  This clock style showcases a house, just like the Chalet style clocks today.

After this style rose in popularity, clocks with houses, carvings, and woodland scenes became the signature style of the kookoo.

Cuckoo clocks have always been handmade and hand carved by highly trained clockmakers.

Today, that is still the case.

Modern cuckoo clock makers are just as dedicated to their craft as the first makers from centuries ago.

…cuckoo clocks produced in the Black Forest must meet the highest of quality standards. Here are a few interesting facts about the way these intricate clocks are put together: When most people picture the cuckoo clock of today they usually think of the carvings and the cuckoo call.  Here are a few other things you should realize about the modern cuckoo clock: There is a cuckoo clock out there that will fit the taste and style of any home. Just make sure the quality is high and the traditions of the clockmakers are intact.

Linden Wood is a great material for carving cuckoo clocks

Linden wood is very popular among the German carving atmosphere. With Germany being popularly known as the cuckoo clock carvers of the world it is important that a person is informed about the history and background of the wood that cuckoo clocks are carved out of.

Lindenwood trees are also known as basswood. They are members of the Tilia Genus and are native to the eastern two-thirds of North America.  Found throughout California due to its perfect climate. This species of tree is the most common species in California nurseries. However, even though some trees are grown in California, there is a European Linden wood tree. This tree was known as being Great Britain’s tallest broad-leafed tree. They added a fashion to the gardens of those who were upper class during the 17/18th centuries. These trees were imported from the Netherlands during this period.  Despite being imported from the Netherlands; the name Linden comes from the word line in German which means rope. This is the trees name due to the inner bark which was used to make mats and ropes.

Lindenwood trees are known as a medium-sized shade tree. Average height is around 50 feet, but they can grow to double their average size. When the tree is younger it will have a pyramid shape but when they start to develop a more rounded crown and straight trunk.

Many people use linden wood to make furniture who like straight grain.

Some people as well use it for medical uses. The oils from the tree are used to help stomach problems and anxiety.

Many people in Germany use this wood specifically for their known trademark of German Cuckoo Clocks. Many German Cuckoo Clocks are made from the wood of the linden tree because of how soft the wood is.

Little do many people know that the linden wood is purchased two years ahead of time, so it has time to age and become the beautiful color that the woodworker wants to use on a clock.

…the linden wood would be the main wood but sometimes depending on the woodworker they may choose to use walnut and pine as the whole entire clock.

For those woodworkers that use pine or walnut for the whole entire clock may be making cheaper clocks whereas the linden wood is softer and more beautiful that will last longer as well. Linden wood clocks are the most common type of clocks distributed from Germany.

Linden wood is used in these clocks due to its beauty and how well it ages. With the sound coming from wood as well the Linden wood carries and makes a beautiful sound.

The grain of this wood is straight which makes a clock beautiful. Not only is the grain straight it is a beautiful light color which holds stain and paints very well so that a cuckoo clock can be original.

This wood is also very easy to clean which makes it a plus knowing that when one cleans their clock it will not be a problem or hassle.

Linden wood, maple, and pine are the most common used woods when a cuckoo clock is made. All these woods are a softer wood which makes the woodworking process much easier. Each wood is carefully chosen depending on the clock’s design.

Some wood is better for certain designs compared to others. Most clocks, however, have a base of linden wood that is accented by the other types of woods.