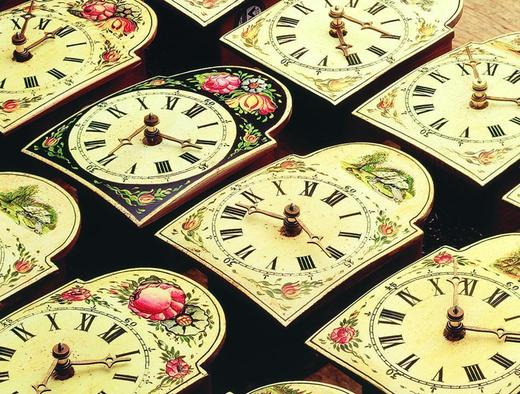 Rombach & Haas was founded in 1894 in a farmhouse that would soon become the center of their cuckoo clock business. The farmhouse was in the village of Schonach in the Black Forest and still is to this day.

In the old days, Rombach & Haas sold special handmade watches and food to keep their business profitable. But soon, trade in the Black Forest grew and the company could concentrate their efforts on the intricate timepieces.

By the turn of the 20th century, cuckoo clocks, sign clocks, and other Black Forest clocks were produced in the factory. Company owner, Ingolf Haas, is now the fourth-generation clockmaker and manages the company together with his wife Conny Haas. For nearly a century, they have built a name that is synonymous with quality.

The special Black Forest Clocks are still made with the same time-honored traditions of decades past. The Association Black Forest Clock (VdS) is what makes these clocks authentic. An original Black Forest cuckoo clock will always carry the “Verein die Scharzwalduhr (VdS)” developed certificate of authenticity. All of our watches and clocks from the Romba (Rombach and Haas) range have this seal.

You can get more information about the seal at www.v-ds.org. The original Cuckoo Clock developed in 1738 and was almost entirely produced in the Black Forest Region. The clocks consisted of predominantly floral motifs. Anton Ketterer used such an intricate shield around his cuckoo clock to give an attractive appearance. In 1850 the cuckoo clock got its world-famous Face that is known today thanks to a competition. Robert Gerwig, the builder of the Black Forest Railway, held a design competition to help the well-known timepiece become more profitable. Friedrich Eisenlohr a carved cuckoo clock for the railway that garnered worldwide attention to the Black Forest Creations. Over the years Schonach has become the center of the cuckoo clock universe. From this center, Rombach & Haas brought the well-known timepiece into modern and contemporary forms. The simple updates still stay true to the classic deigns and can now be found modern living rooms across the globe.

Each clock takes hours of intricate design and labor. But those hours of handmade specialization make customization possible. You can add personal touches to every design. Things like anniversary dates, messages of congratulations, birthdays, retirements, and more!

These clocks or one of the few gifts that can be passed down for generations!

They make the most thoughtful and unique gift!