The Company and its namesake, August Schwer, have become synonymous with quality clock design. Founded in 1885, the company is known the world over for its high level clocks, award-winning designs, and over all “Black Forest” feel.

The company itself was founded in Schonach and its factory now stands in Schönwald. For the clock masters at August Schwer the attention to detail is of utmost importance. Every facet of their clocks, from wood selection to carving, is a process rooted in tradition.

August Schwer sources most of its materials from inside the Black Forest, and the region is also a traditional part of their overall clock designs. Most August Schwer clocks feature snippets of life from the very forest that inspires the clock maker’s everyday work. Chalet clocks will often depict woodland scenery, while the carved clocks focus on painstakingly accurate woodcarvings from wood selected from the Black Forest.

In 2000 the company was taken over by long time employee, Andy Winter. The company’s heritage of excellence is not lost on Winter, he has garnered many cuckoo clocks awards since taking over August Schwer.

August Schwer cuckoo clock company dates back to 1885, where it was founded in a guestroom of all places at the Schlosshotel in Schonach.

they are known around the world for their premium cuckoo clocks that remain totally authentic to the Black Forest, complete with detailed carvings and decorations.

The clock factory is present in Schönwald and has frequently produced the Black Forest Clock of the Year, an award they won as recently as 2015.

everything is always done with extreme precision This company remains authentic in terms of their production materials as well, only using wood and metal from the Black Forest itself. Only on rare occasion will they use raw materials from outside of the Black Forest.

Clockmakers here are completely dedicated to their craft, pouring an enormous amount of attention into the details of their clocks.

Whether it is a Chalet clock with forest scenery or a carved clock with plenty of carved figures,

…everything is always done with extreme precision.

If you are looking for a truly authentic Black Forest clock, you can’t go wrong by selecting an August Schwer clock.

The factory is currently run by Andreas Winter, who worked in the factory for decades before taking over the job.

Engstler has been in business for decades, dating back to 1952. The family business began in Villingen-Schwenningen and still operates from the Black Forest to this day. They are committed to old world designs, yet never shy away from new challenges.

Engstler was founded by Josef Engstler and is now run by third generation, Gerold Engstler. The combination of young and old is something every clock connoisseur will notice in the work of Engstler. In fact, they were the first maker to offer quartz movements and were directly involved in the innovation for cuckoos.

Engstler is famous for rising to the challenge. When the MINI drove on to the car making scene the designers developed a clock that had a MINI driving out of a cuckoo house instead of the traditional bird!

Understanding that respecting tradition does not mean shying a way from new ideas is what makes owning an Engstler so special and rewarding.

Rombach & Haas has been in business since 1894 and is still run by members of the very family that began making clocks over a century ago. Their factory, in Schonach Germany, stays true to its roots– just as the clocks it manufactures.

The hallmark of a Rombach & Haas timepiece is tradition and innovation. While staying true to their heritage, the company has managed to influence modern cuckoo clock designs like no other company. They have introduced modern designs while still managing to offer hand-painted shield clocks, as well as, intricate antique reproductions.

The Rombach & Haas shop still features original work benches from its founding, yet the clock makers now filling the factory floor always have an eye to the future. Their designs have garnered celebrity attention from the German national soccer team as well as famed hairdresser, Udo Walz.

The company is run by fourth generation clock makers, Ingolf and Conny Haas, and the family touts its deep Black Forest roots by being socially and economically active in the region.

Trenkle cuckoo clocks come from the beautiful Simonswälder Valley near the Black Forrest town of Simonswald. The company was founded in 1966 and has been known as a groundbreaker since its conception.

Trenkle produces a number of high quality items including weather houses, pendulum clocks and swinging clocks; in addition to the highest quality chalet and carved clocks the world expects from the Black Forest region. Their designs have something for everyone, from the high-level collector to the more cost-conscience admirer.

All of Trenkle clocks meet the highest standards while still being affordable to clock lovers around the world.

How is Time Kept In A Cuckoo

Why is it so important to know how every mechanism moves in a cuckoo clock?

The time is not just kept by the cuckoo itself but many other moving parts. These moving parts of a clock all work together to keep the time accurate. Because the Black Forest clocks are given a certificate of authenticity the cuckoo clocks need to be moved by a pendulum to guarantee authenticity.

So how exactly does a pendulum make the clock work? 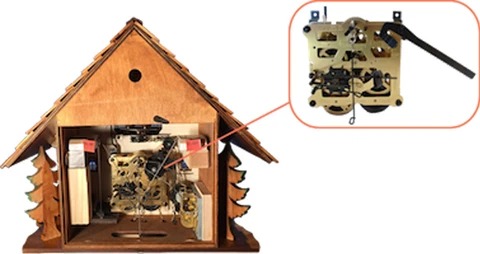 To make the clockwork, the pendulum has to swing back and forth at a steady and even pace.

WHY? This is critical to making the cuckoo clock run correctly.

The pendulum swings back and forth in a one-second time frame. This movement is possible because of the cuckoo clocks weights on the pendulum.

The weights are connected to the cuckoo clocks internal mechanisms. These weights make the tic tok sound when the weights move with the pendulum allowing the clock hands to move and the cuckoo to go off. 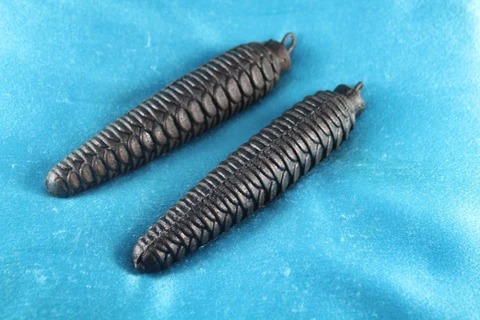 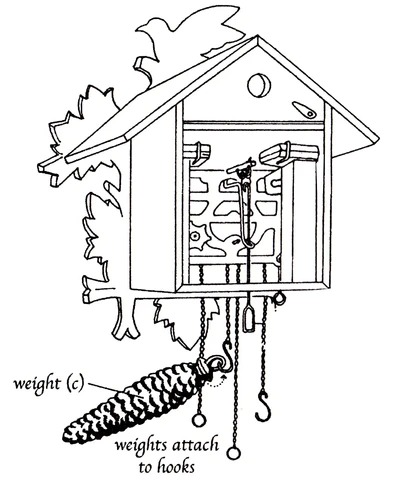 The weights slowly go down to the floor. They drop and when they are on the ground they need to be rewound. These weights can either be a one-day cycle or an eight-day cycle.

The one-day cycle is usually a cheaper option and the weights are lighter but you will have to wind the clock daily.

There is a clock that will be battery powered. Quartz clocks are not ones that have to be wound up every day and they do not have weights.

These clocks do not get a certificate of authenticity because of the lack of mechanical movement that occurs in the Black Forest Cuckoo Clocks.

How Does The Bird Work

So we know how time is kept but how exactly does the cuckoo bird work?

Every hour a tiny bird made out of wood will come out and sing “kuku”. There are two small pipes made of wood attached to the air chambers on both sides of the clock. When the air starts filling the chambers and becomes full with the movement will start to activate the bird’s call. The squeezing of the air in and out of the whistles. The depth of the cuckoo call depends on the size of the clock. However, one thing is the same no matter what the clock is, the first sound to come out is the “cu’ and the second is the “co.” 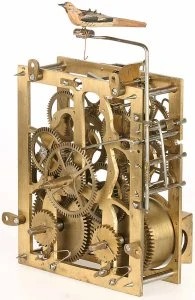 All the cuckoo clocks will have a cuckoo bird. The in and out movement of the bird is driven by the movement of the weights. In quartz clocks, the sound and movement is powered electronically.

There are modern-day cuckoo clocks that are run with batteries and are not authentic. These clocks, however, can still be made from people who have made the authentic clocks.

Choosing a cuckoo comes down to style, preference, and how much one wants to spend on a clock.

How to Spot an Authentic German Nutcracker That is Worth its Weight in Walnuts (or Hazelnuts or Brazil nuts!) 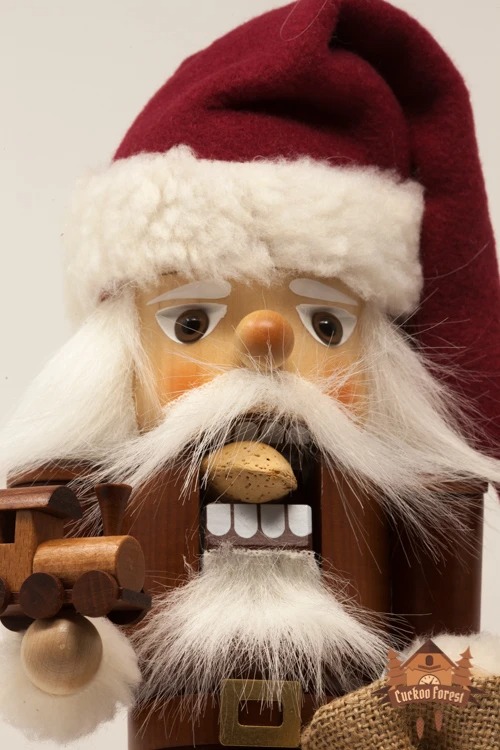 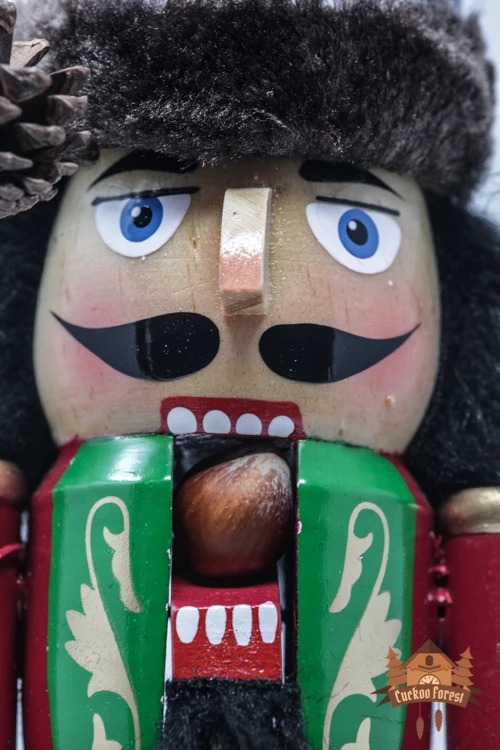 A nutcracker is a special gift that can be handed down for generations. But a good nutcracker shouldn’t just sit on a shelf and be admired –
it should actually crack nuts!
…and be useful.

Believe it or not,

…many people who spend hundreds of dollars on nutcrackers are afraid to put a nut in the jaw of their silent soldier.

But Cuckoo Forest knows a quality nutcracker is all about sturdy German craftsmanship – so they put theirs to the test.

In this test, Cuckoo Forest purchased various nutcrackers from Christmas Markets and department stores. Probably the first-place people looking for nutcrackers would think to shop.

They then grabbed a few of their own authentic German nutcrackers anyone can purchase from cuckooforest.com and put them all to the test!

5 varieties of nuts were used:


The results were not all that surprising to anyone who knows their nutcrackers.
The authentic German nutcrackers came through unscathed, cracking over 30 nuts in a row without a single failure!

You can check out all of the nutcracking glory here in this YouTube video. 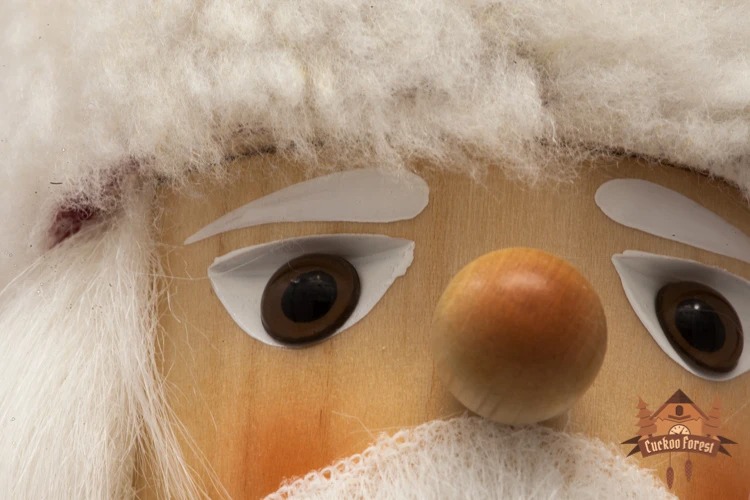 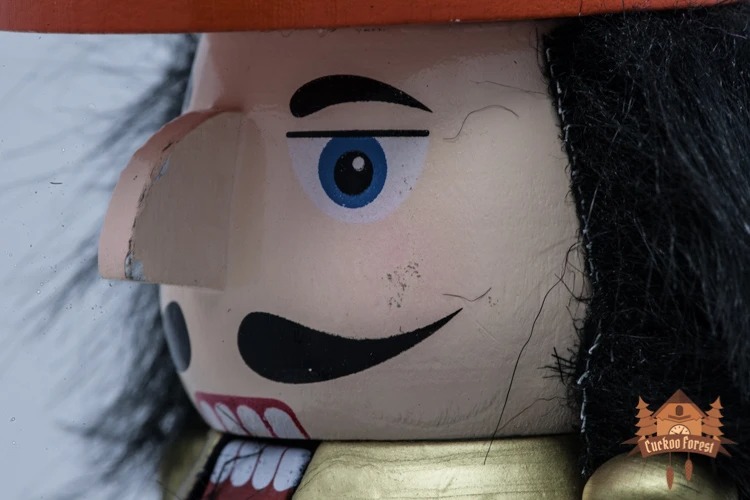 Can you tell the difference in quality between the two nutcrackers?

When it comes to nutcrackers that really crack nuts,

{
The truth is that expensive nutcrackers purchased from department stores or Christmas markets are probably not worth the hundreds of dollars spent.

Cuckoo Forest only sells authentic German nutcrackers for a reason. Look at the details on the painted faces!

The clothing and details scream charm and quality.
These things are important because a nutcracker with shoddy detailing will probably crack under the pressure of a real nut. 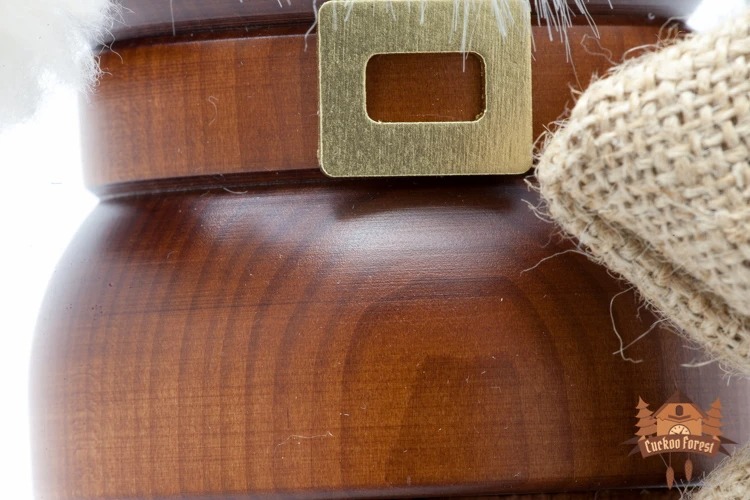 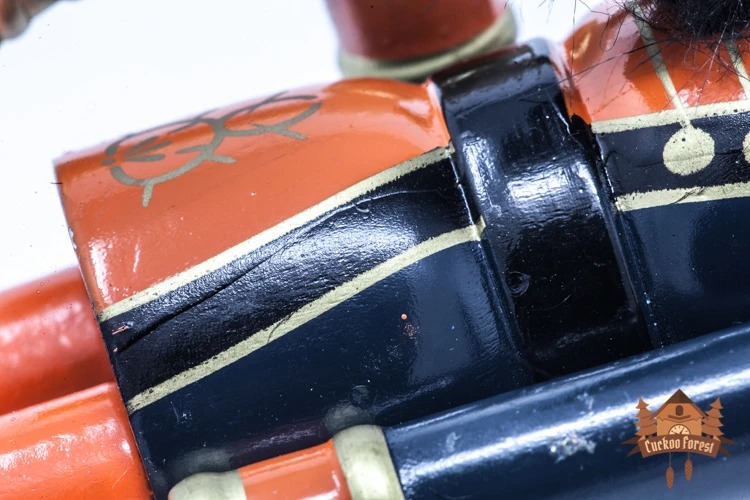 When it comes to nutcrackers, details count.
These nutcrackers will stand the test if time. 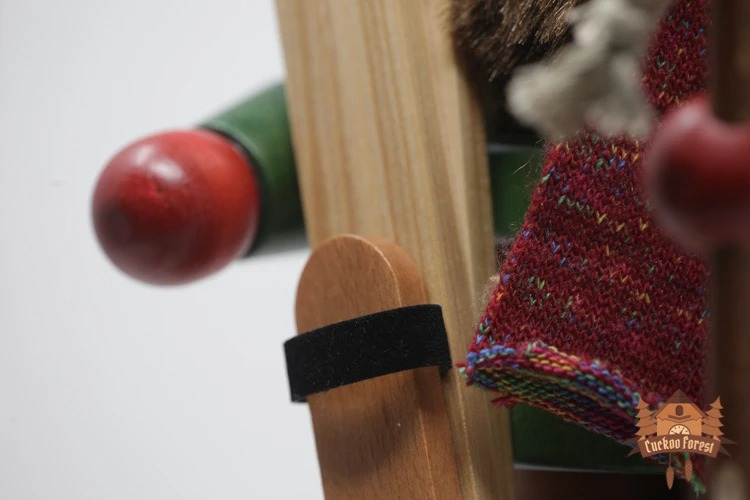 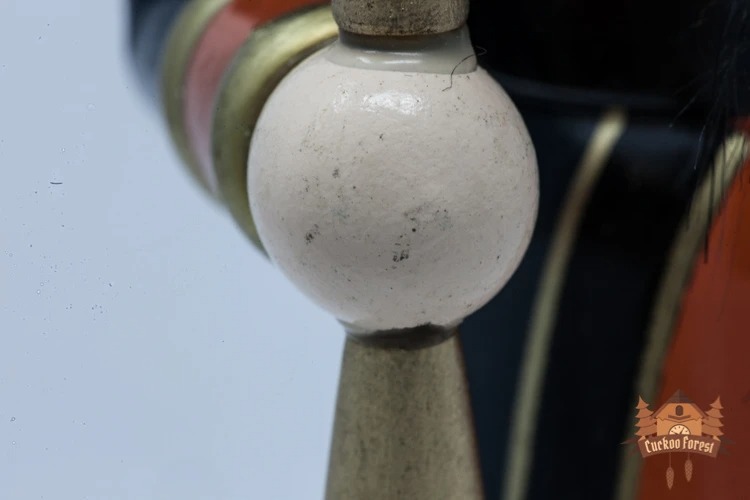 Even details like skis, scarfs, and other props are not over looked by the German artisans.
{
In German culture the gift of a nutcracker means good luck, so they make these nutcrackers to last generation after generation. 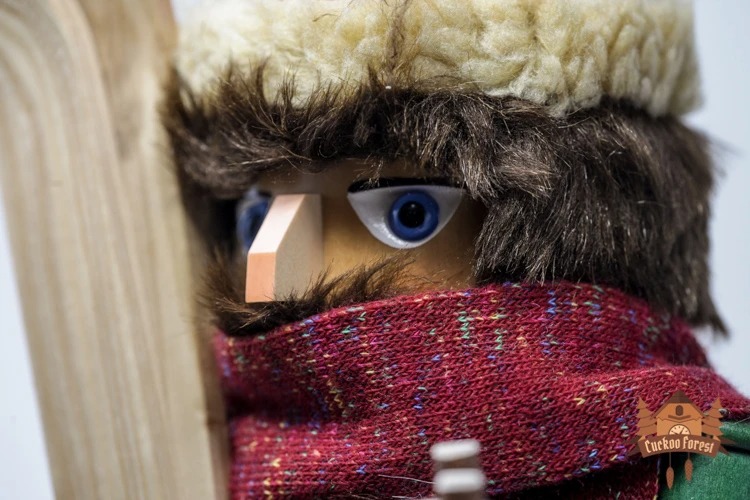 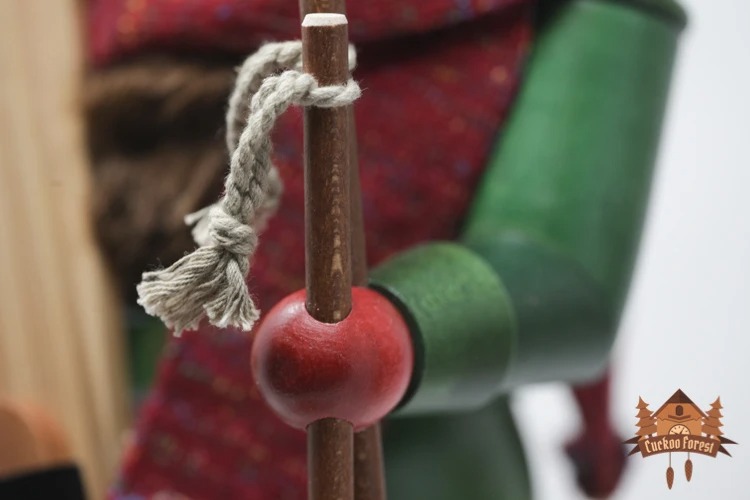 They are meant to be passed down and enjoyed for years to come, not just stored on a shelf during the holidays.

Nutcrackers are serious business for the men and women who craft them. Cuckoo Forest only sells the authentic German figurines because this 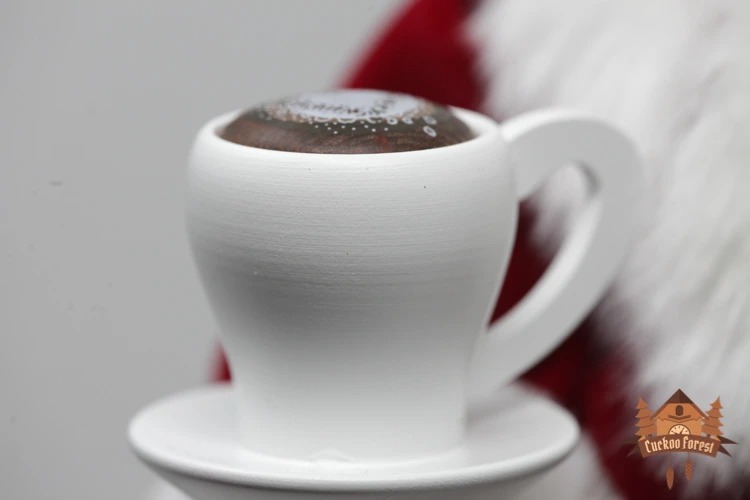 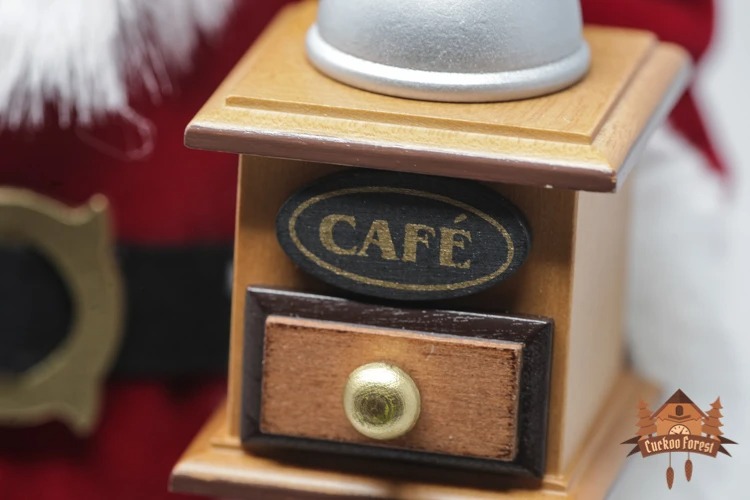 German Nutcrackers in the shape of Soldiers or Kings have been made, displayed, and used since the 15th century.
A good nutcracker could be made from up to 130 carefully assembled pieces! 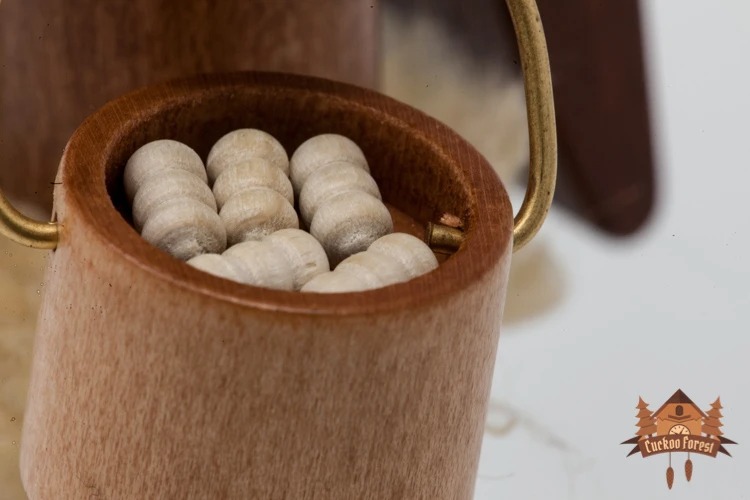 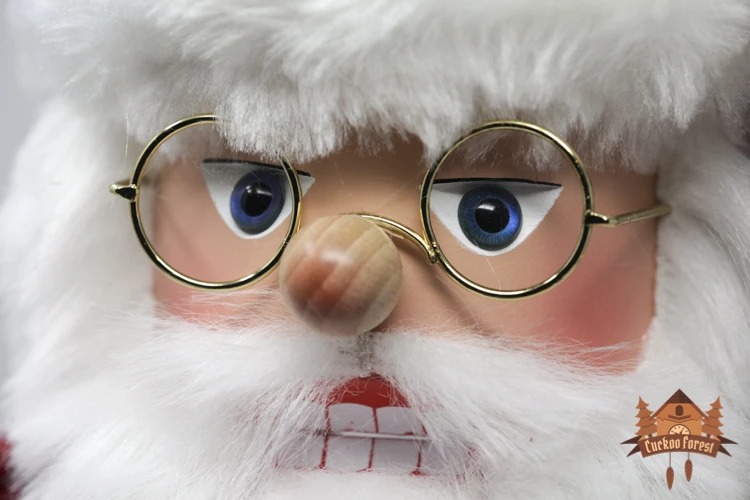 But what use is all this craftmanship and detailing if your nutcracker cracks under the pressure of its original purpose? Cracking nuts.

Cracking nuts with your nutcracker and enjoying them as a family can be a fun conversation starter during the holidays.

With that in mind the folks at Cuckoo Forest made their purchases, grabbed their authentic nutcrackers, and put them to the test.

“Sadly, the ones purchases at department stores and Christmas markets cracked under the pressure.” Handles were cracked, jaws broken and expensive nutcrackers ruined.

In fact, makers of these models actually advise owners not to crack nuts with their nutcrackers.
However, the bauthentic German nutcrackers cracked nut after nut! Dozens of nuts were put in their jaws and cracked over and over again. 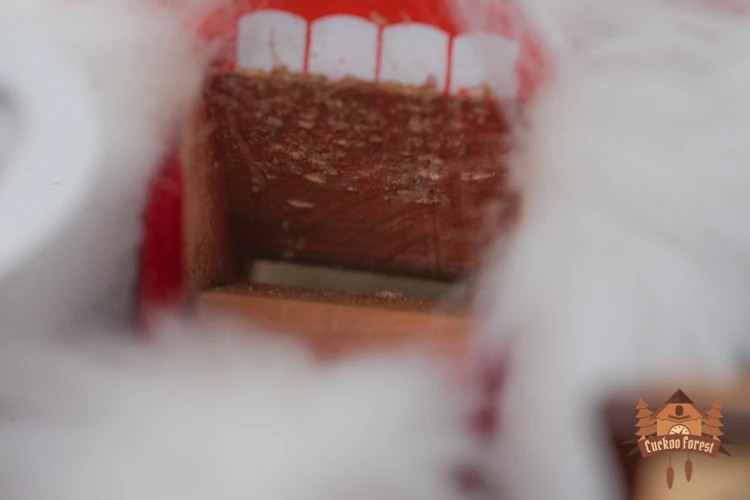 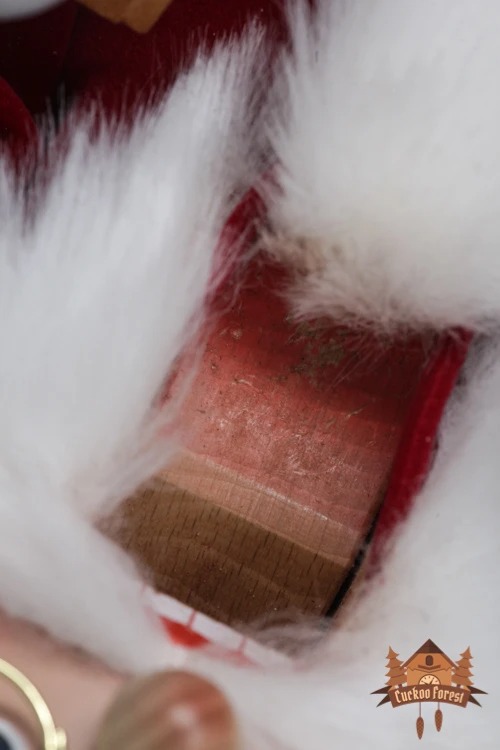 Just a few minor scratches that one would expect after cracking hard-shelled nuts.
These nutcrackers are clearly made for a purpose! 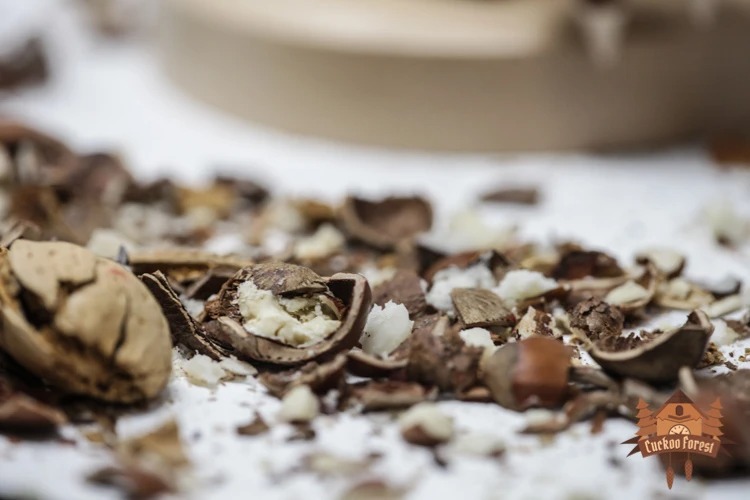 The aftermath is glorious for a nut lover and nutcracker lover! Just cracked shells and not cracked jaws. 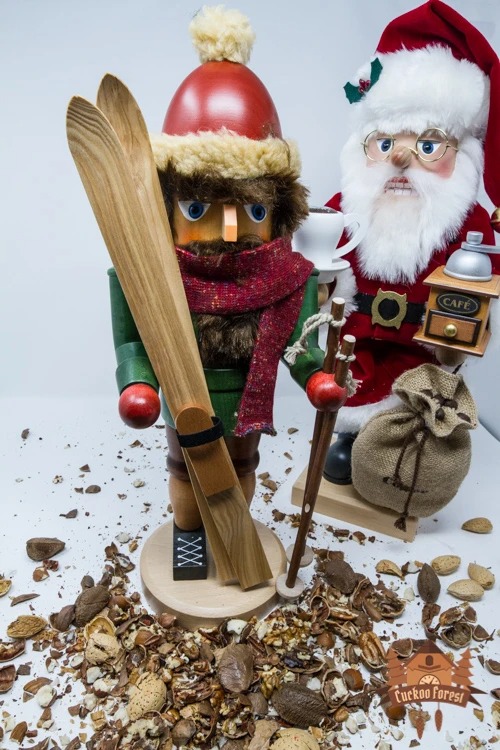 The proof is in the craftmanship and details of these expertly assembled German nutcrackers.
“Don’t spend hundreds of dollars on a dust collector! Buy an authentic German NUTCRACKER!”

Theses will bring joy to you, your kids and their kids for years to come.