The Inside Scoop of German Smokers 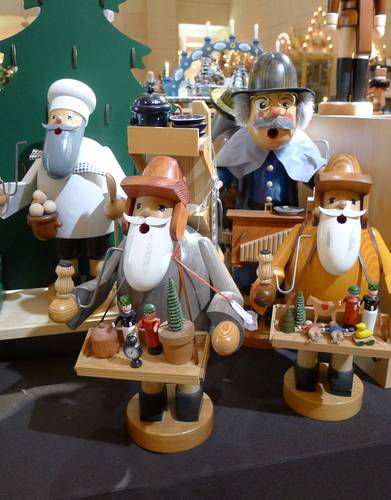 German smokers are full of history but are still used today and will be used for generations. They are used today due to their design and their history.

The use of incense has been used by numerous amounts of people throughout the world for thousands of years. Incense was many times considered a treasured gift by the people of the Middle-East, Africa, India, and Europe.

Many people used the incense for religious get-togethers and ceremonies. It was used to cleanse the air of evil spirits. The story is told that after a long journey to find baby Jesus, the Three Wise Men gave their three most valuable and precious gifts to him, gold, frankincense, and myrrh.

Today these gifts are still celebrated in Germany during a festival.

The Festivity of The Three Wise Men is where these gifts are traditionally used. While in many places Christmas lasts only a day, Germany celebrates for twelve days. From the 26th of December to the 6th of January. Each day of this twelve days has a special meaning and on the last day the celebration of the gifts of the Three Wise Men. Many people use German smokers on this day to mark the end of the Christmas season.

Even though incense has been around for an extended period, the German Smokers (Rauchermen) first came into existence in the late 1600’s. The first area where these smokers were used was the Miriquidi Forest area. This area is in the southeast region of Germany. Locals designed tiny figurines made from a single piece of wood that was taken from the forest. German smokers are a main source of income still today,

…however, this was not always the case.

Since the 1100’s Miriquidi Forest has been a rich mining area. During this time the main export was silver. Then after the silver rush tin mining because popular.

While this was all going on population skyrocketed.

Then the Swedish invaded the area which evoked a war that lasted thirty years. This killed the region and drove out many people who were once very successful.

..during this time the tradition of German Smokers and other handmade wooden items such as German nutcrackers became a huge source of income due to the mining scarce.

During this time people had to look for another source of income and many people moved to the city because the mines were no longer in use and people needed jobs. This was when skilled woodworkers began to make beautiful works of art and the German smoker was made. During this time their products were shipped around the world making them well known.

During the period of WWII,

…mines were producing uranium but the woodworking business took off.

It was the main source of income for people in the German region. German Smokers became in high demand. They have highly sought after along with other word working goods.

…this was not a problem for people located in the mountains due to the remoteness. During this time a few types of names rose to the top with their German smokers:-

These names are highly associated with German Smokers.

Tradition with these items is kept throughout the years.

German smokers are among the highest demand woodworking art on the market today. Today’s wooden smokers have a very close resemblance to the traditional Nutcracker;

…smokers are designed to burn incense. This makes them much different than the traditional nutcracker which is used for decorative purposes.

The Erzgebirge smoker men are among one of the oldest crafts from the region.

It is believed that the first incense smoker was made of dough and paper Mache. During the late 19th century however wood became the main material for these smokers. Woodturning to make these smokers is popular today. The smoker consists of two hollowed out body parts and an incense cone will be placed on the lower body part then lit. This will make the body glow and smoke will then come out of the mouth.

The size of these smokers is from four to twenty inches.

…there are some smokers more than forty inches tall. There is more than one specific design for German Smokers. There are several designs to be exact. Bakers, firemen, doctors, and Santa Clause are the most popular smoker designs. These scents are not only used for their aroma but for their health benefits. These scents will make the house smell good and help with stress and other issues one may be having. The purpose of incents is to relax a person and make them feel good.

Even though the German Smoker is the most popular item in woodworking today, there are many other woodworking items that are frequently bought.

The German Nutcracker is a popular item on the list. It is used primarily as a decoration during the Christmas holiday season. These figures can come in traditional style all the way to a zookeeper and everything in-between. Another popular item is wooden Christmas angels. These are a beautiful authentic German Christmas set that will make the whole family fall in love. Along with angels you can buy candle arches for your candle set.