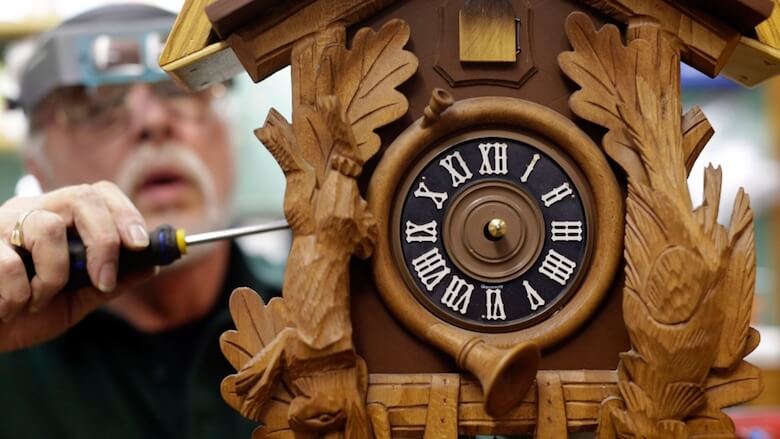 There is a lot of adventure and emotion tied to your first, authentic cuckoo clock. “Part of the fun for clock owners around the world is learning the ends and out of their artful and intricate timepieces.” Once you’ve unpacked and hung up your clock — the fun begins!

Now, the vast majority of the time your cuckoo clock will run, like well—clock work. BUT this is a family heirloom meant to be handed down for generations, so what happens if the clock stops working? Don’t worry—there are plenty of options!

One of the most common reasons owners have issues cuckoo clocks is that the mechanical movement of the clock is not level. This can throw the timing off. The most common cause of this issue is that the clock is not hung level on the wall. So, check the clock position.
If the clock is leveled, but the timing is still off it’s time to take a look “under the hood” so to speak. The pendulum wire may be bent. If this is the case try using a screwdriver to bend the pendulum wire slightly.
Also, check to see if the cuckoo clock hands are touching and causing friction. This is also a common occurrence. Just make sure they are in the proper position.

If the cuckoo bird silent, you cuckoo clock is in need of a little TLC.

If your clock has just been unpacked, be sure the paper around cuckoo clock parts has been removed. Also, be sure want to be sure that the wire latch on the cuckoo door is moved.

You may want to check to see that the lift wire is actually in place. This wire lifts the cuckoo bird and can sometimes be bent in shipping. Also, check to make sure that the wires that lift the bellows have not been fastened together for shipping.

And, finally, make sure that the cuckoo clock shut off switch is in the off position.

“These few issues are the most common when attempting a DIY repair on your cuckoo clock and usually do the trick.”

The important thing to remember is that cuckoo clocks are known for their intricate inner workings. Much like our counterparts in the watch community, there are professionals who dedicate their entire lives to making these beauties run. Our friends at Watches International do just that—if you have a smaller clock that needs attention. Watch repair may seem a bit more common BUT for the larger, cuckoo clocks, there are professionals who do the same.

Just be sure to ask about their certification and shipping procedures before sending off your priceless heirloom. There are a Certified Black Forest cuckoo clock repair shops in the United States who are extremely qualified to handle you cuckoo clock related issues.